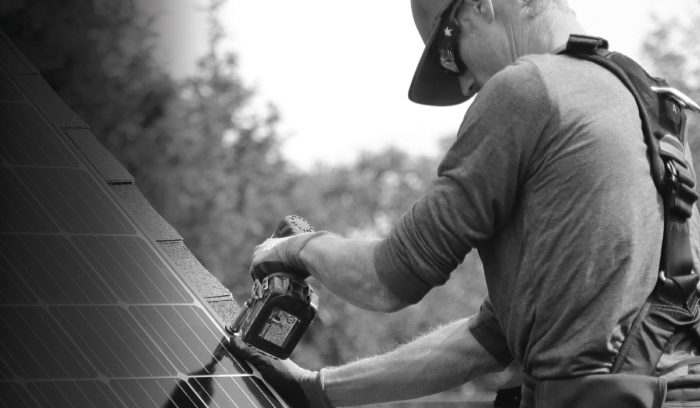 ”I want to do something that actually makes a difference.”

Seven years ago, Josh Ford took a pay cut to work for Namasté Solar. He had been remodeling houses, but that work wasn’t doing anything for the planet. “With all the crap going on in the world,” he says, “I wanted to feel like I was working for a better tomorrow.”

Namasté Solar was founded a dozen years ago by three friends in Boulder, Colorado. They started out delivering solar panels to job sites on bicycles. Today, 175 people work for the company, and nearly half of them are co-owners, including Ford.

The work—installing PV panels on existing homes—is dangerous, thanks to steep roofs and extreme weather. The first thing Ford and his crew do when they arrive at a job, before they even say “good morning” to the customer, is talk safety. They walk around the house and identify hazards, from overhead power lines to aggressive dogs. “We do this on every single job,” he says. “We’re not just clocking in, clocking out, and getting our paychecks. We all look out for each other. It’s part of the culture.”

Ford has been working with his hands since he was little. “My dad was always at work. So I was Mr. Fixit at six years old. It’s in my blood.” Now, he says, “I couldn’t stand an office job. I love being outside, working with my hands and making customers happy.”

“Going beyond what the customer wants, that’s craftsmanship to me,” Ford says. He wants people to look at the conduit he ran on the side of a house and know he cared. He wants them to say, “Wow, that guy really knew how to run that pipe.”