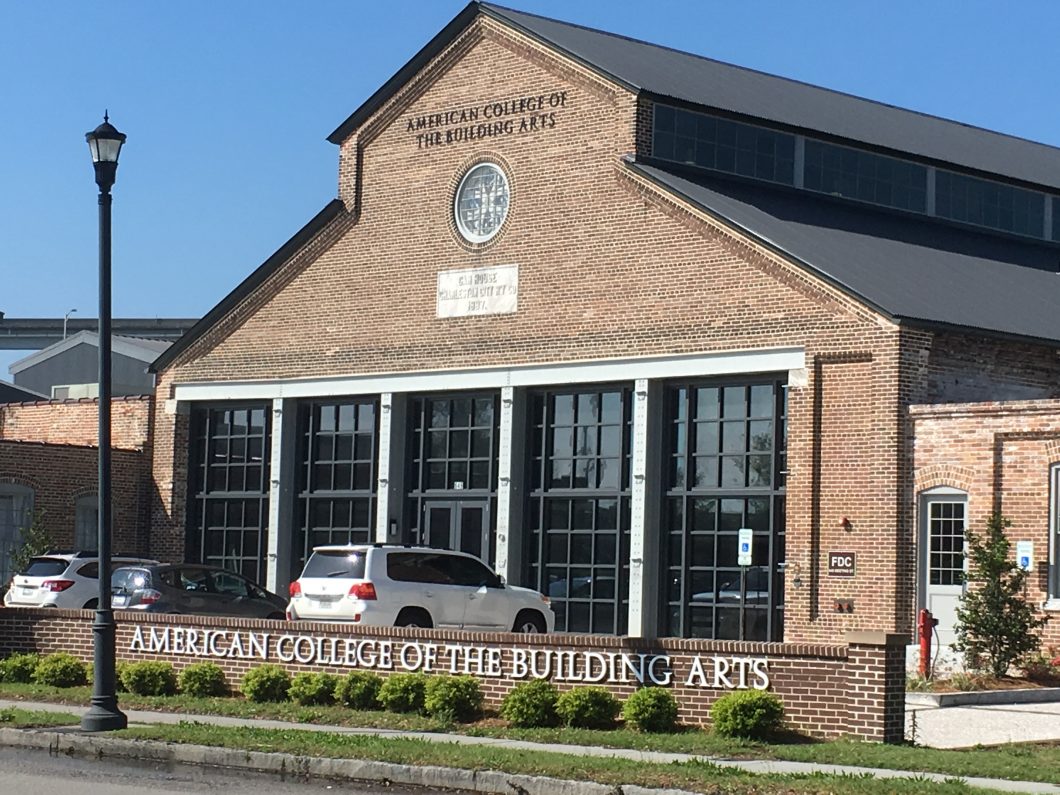 Often, conversations about vocational training and young people entering the trades include the comment, “College isn’t right for everyone.” I’m sure that I’ve muttered those words myself, in just that context. Recently however, I’ve had some experiences that have revealed the cracks in the logic that because someone is not interested in a more modern college degree, the trades would be a good place for them—or the opposite, that a four-year degree isn’t useful to someone who hopes to work with their hands. One of those experiences was a visit to the American College of the Building Arts, an institution that challenges the notion that a four-year college degree and a hands-on training in the trades are mutually exclusive.

The American College of the Building Arts (ACBA) was founded in 1989 after Hurricane Hugo tore apart the South Carolina coast. Leigh Handal, who showed me around the school’s Charleston campus, told me that Hugo left many of Charleston’s historic homes in need of architects, carpenters, plasterers, blacksmiths, and masons with the knowledge and skills to repair and replicate traditional details. As it turned out, few could be found.

“Demographically, we’ve had students from across the US., including Alaska,” said Handal, “One-quarter are women. Our median age is around 26, though students range from traditional high school seniors who have just graduated to returning veterans, to one student who has retired in her late 50s with a PhD who wishes to begin a second career.”

On the tour, Handal first showed me what looked like a pretty common classroom with desks and chairs and explained that all students at ACBA take a full curriculum of Liberal arts classes including English, math, sciences, humanities, and foreign languages. The professors do often bring architecture, building, and craft to these courses in innovative and creative ways, she said. One English professor, for example, not only teaches Shakespeare, but also about the design of the Globe Theater.

Next, we saw the rooms where students learn to draw on traditional drafting tables. All students are required to learn to create architectural drawings by hand before they learn to use CAD, Handal explained. So, all graduates can generate, read, and work from a set of plans, whether done by hand or on a computer. We also saw a science room that she said was a gift from Boeing, where students learned wood-, metal-, and other material-sciences.

Finally, we saw the stone, plaster, and masonry shop, the woodshop, and the blacksmithing shop. While the shops themselves were impressive, with woodworking benches, hand tools, anvils, and many modern machines, what was more impressive was seeing the students’ projects in progress. The replica of a historic plaster ceiling, a conical timber-framed roof, and the ornate iron railings that I saw during my visit, are mostly the work of seniors, and the result of a thoughtfully staged education that allows students to build such masterpieces while still in training.

Along with their classroom and studio time, students spend 10 to 15 hours each week in the shop of their respective trades, plus the time they need to practice skills or complete a project. They learn to sharpen tools before they learn to use them, to complete projects with hand tools before they learn to use power tools, and in some cases, to make tools that they can’t buy. They have to demonstrate proficiency in certain areas, like generating classical architectural drawings, laying up a brick wall, framing a winder stair, or forging a coat hook before they can move forward in their program or graduate from the school.

I had the pleasure of spending time with two department chairs during my visit to ACBA. Jack Brubaker, the chair of the blacksmithing program was a full-time artisan blacksmith for almost 50 years before he came to ACBA to teach. Jack has bachelor’s and master’s degrees in fine art and operated a successful blacksmith shop in Bloomington, IN. for many years. He’s taught for the Artist Blacksmith Association of North America, of which he was president in 1984. He has also taught for the British Artist Blacksmith Association and lectured at the World Congress. Jack is thrilled to be using his retirement to pass along what he has learned over a celebrated career.

Bruno Sutter, the chair of the woodworking program is a “graduate” of France’s Compagnons du Devoir, a prestigious network of tradespeople who train future generations through a 10-year program that includes full-time employment in a field of work, evening classroom time, and weekend shop training. Bruno explained that you don’t really graduate from the Compagnons du Devoir—he has no diploma—though many do not successfully complete the training, which is as much about communal living and building character as it is mastering your trade.

Bruno was brought to ACBA to help create an American version of his training, which meant figuring out how to squeeze it into four years. One aspect of training he feels is important is an introduction to entrepreneurial skills. Bruno’s seniors are required to develop an in-depth plan for the business they would eventually like to operate. The detailed plan must include a set of architectural drawings for the shop they will need.

Many ACBA graduates do end up working for themselves. All end up working. A recent survey of three ACBA graduating classes revealed that 100% of graduates are employed in their field of study. Leigh explained this early in my visit to the school. After seeing the facility, learning how rigorous the program is, seeing the students’ work, and chatting with a few well-qualified instructors, I’m not surprised at all.