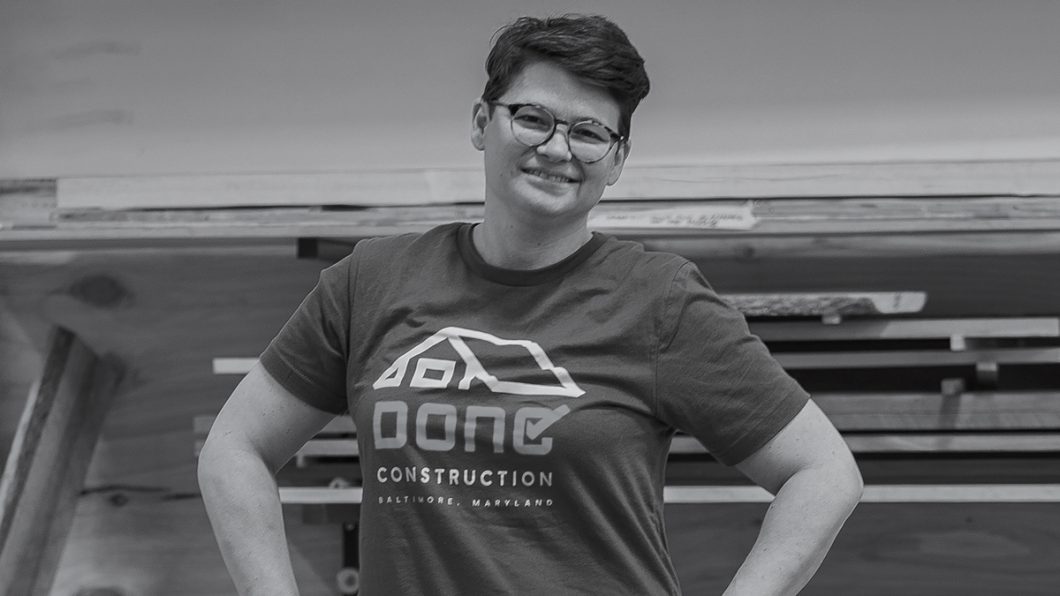 Beth Pointer isn’t a stranger to the world of construction. After graduating college as an English major and in need of health insurance, Beth found an apprenticeship in the ironworker’s union in St. Louis. She worked as a union ironworker and became a journeyman, leading her to a 20-year career in union organizing (mostly retail and healthcare unions) while she rehabbed houses on the side. A move to Baltimore introduced her to the city’s Station North Tool Library, where she found a community of makers who were also rehabbing old homes in the city.

There was a consensus that someone in the group needed a general contractor’s license to make permitting and city inspections easier. Beth was burnt out on union organizing and ready for a career change. And so, five years ago, Done Construction was born, focusing mostly on kitchen and bath remodels.

What seems to set Done Construction apart from competitors is an emphasis on client communication. Beth and her team are often in folks’ homes for weeks or months during a project, and it’s clear that both doing good work and being the kind of team that a homeowner doesn’t mind having around is key to their success.

“We attract a lot of clients who are looking to have a different kind of relationship with a contractor,” she says. “We sat down as a company and talked about what we really wanted out of this business. It’s 40-plus hours of our lives each week as well, so we wanted it to be fun and to have the relationships with clients be authentic,” she says. Beth even collaborates on music playlists with her clients, to get to know each other better. “It’s really about having a deeper, honest relationship with clients, and it’s worked out really well for us so far.”

Her team, currently five people, is also all women. Says Beth, “We’re not exclusive, it just so happens that of the people we have interviewed, the standout candidates were women. We look for people who can communicate and work well in a small team.”

With her background in labor organizing, Beth is also very aware of her business’s structure and its long-term sustainability. She does her best to be a conscientious owner and boss, but the next step, in her mind, is moving to a worker-ownership model. “I want this to be something that continues for generations,” she says.