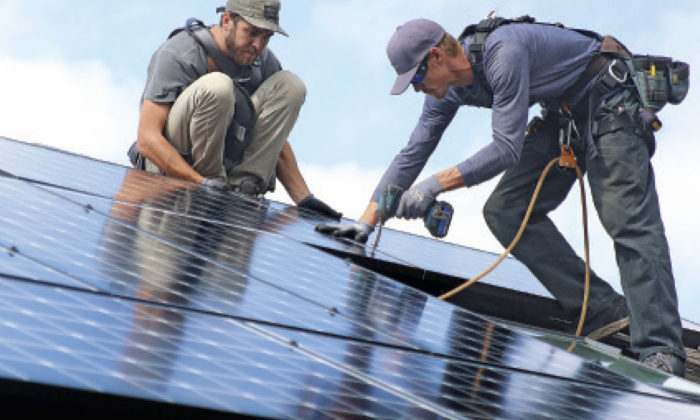 Last year, Facebook announced that it would be building a new data center in Newton County, GA. The $750 million project is scheduled for completion in 2020. To provide the great demand of electricity the data center will need and meet Facebook’s commitment to renewable energy, the Silicone Ranch Corporation, Shell’s solar-energy arm, recently announced that it plans to spend $150 million on three solar farms in nearby Early County, Ga. The large-scale solar install is expected to bring 400 jobs to the region. If you use Facebook and think kindly of renewable energy, or are looking for a green energy job in Georgia, this is a good-news story. A big-picture look at employment in the solar industry is a bit more convoluted, but in the end, still promising.

In 2016, the solar power industry became the largest employer in the energy sector. Imagine this: According to the U.S. Department of Energy (DOE), the solar industry employed more people that year than industries producing electricity from oil, gas, and coal, combined. And not just a little bit more—the 374,000 or so employees getting it done in this renewable energy sector was double that of oil, gas, and coal, combined, according to the DOE. While electrical production from coal was declining significantly, generation from natural gas increased 33% that year, but solar electricity far outpaced anything else with a 5000% increase in electrical production in 2016.

Given these statistics, it hard to believe that solar-generated electricity still contributes only about 2% of our total production, with fossil fuels doing nearly two-thirds of the heavy lifting, followed by nuclear energy production at almost 20%, and finally the entire renewable category making up the remainder. Solar is among the smallest contributors to the renewable category and our overall electrical production.

According to an article on Forbes.com, the last two years saw a loss of jobs totaling 18,000 positions in the solar industry, which is largely the result of the Trump administration’s 30% tariffs on imported solar panels. While the tariffs affect all of the solar industry, they hurt large-scale projects more than smaller residential projects, according to a former executive at Colorado-based Namaste Solar. That’s because residential customers pay a large proportion of their cost for labor, while on big commercial projects, a much greater proportion of the costs are spent on equipment.

In 2018, 56% of solar installation work was residential, 30% was non-residential, and 14% was utility scale. At least one Chinese solar panel manufacturer, JinkoSolar, has decided to circumvent the tariffs by opening a US-based manufacturing facility in Jacksonville, Fla. This could be a win-win by creating jobs and providing affordable equipment to installers and customers.

Despite the fact that employment in solar energy has dipped from its peak in 2016, a new report from The Solar Foundation, the “National Solar Jobs Census,” is promising for skilled and unskilled laborers who would like to work in renewable energy. It’s worth noting here that the DOE and the Solar Foundation offer vastly different numbers for the total people employed in the industry. The disparity is the function of different methodologies for surveying and reporting these statistics.

According to the Solar Foundation’s Census, there were 242,343 people employed in solar work as of November 2018. Of the jobs that make up the solar industry, installation and project development positions make up the largest category with over 155,000 employees in 2018. Of those jobs 87,000 are residential installers. According to Yahoo! Finance, “A solar panel installer is the fastest-growing job in eight different states, including California, Hawaii, New Mexico, Florida, North Carolina, Missouri, Minnesota, and New Jersey,” and the median pay of $39,490 per year is on pace to increase 105% by 2026. (If you are interested to see how the area you live in is doing with solar industry jobs, the Solar Foundation’s Census offers state by state reporting on job growth in all 50 states.)

According to the Census, women and minorities fill 60% of solar jobs. And sales, management, and electrician/construction positions are the most in demand, with wages for the latter categories ranging from $24/hr to $32/hr for electricians and $19/hr to $28/hr for non-electricians. Like the construction industry, hire managers in solar say that it is difficult to find qualified employees.

The Solar Foundation is hopeful that 2019 will again be a year of growth for the industry, but cautions that sustained policy support is a critical and unknown piece of the puzzle. As noted, the Federal Government’s tariffs are hurting job growth in the industry, but it seems that individual states have the power to affect growth despite the hindrance from DC. Last year, California passed a rooftop solar mandate for all new homes, which is expected to increase sales by 41% and create thousands of jobs in the state. Illinois’ Clean Energy Jobs Act, which is currently making its way through the state’s legislature, has an ambitious goal of making the state’s energy sector carbon-free by 2030 and powered completely by renewables by 2050. The proposed legislation includes training for workers interested in clean energy jobs and transitional support for workers in the declining coal industry. New Mexico is working on legislation to provide utility customers access to community solar projects where remote solar panel installations can provide credits towards their utility bills, an effort to give people of all economic levels access to clean energy and to create jobs. Other states are passing laws to allow and/or increase the benefits of net metering and solar leasing, favorable policies for the growth of renewable energy production and employment.

All of this news seems to add up to one thing: if government and businesses continue to make the right decisions and smart moves, the solar industry can be a job creator for skilled and interested workers for years to come. Unfortunately, all things energy seem to be political and polarizing and we’ll have to wait to see how this all plays out. It sure seems however, that if the solar industry interests you as a hands-on worker, you likely have a future with the potential for steady employment and growth.