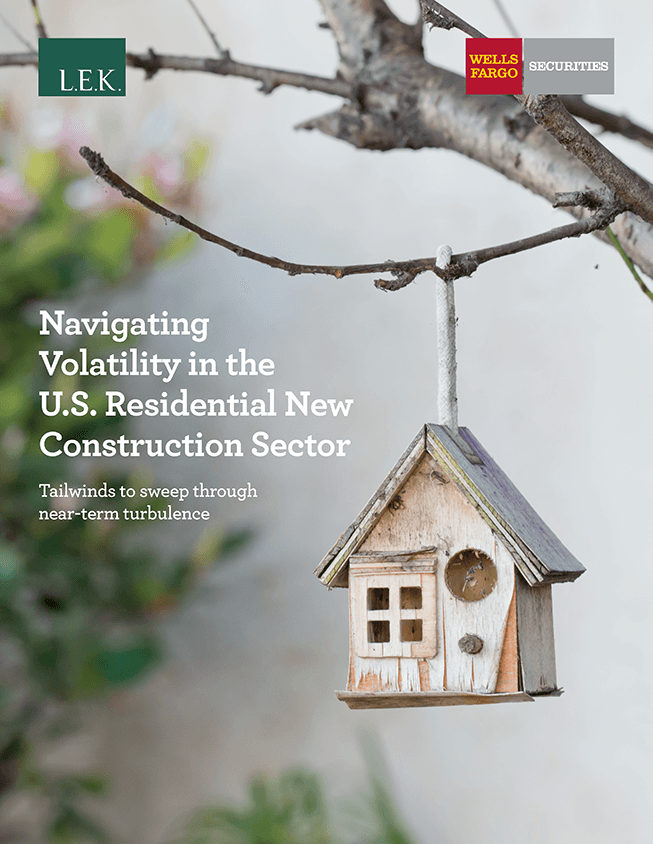 Wells Fargo Securities and L.E.K. Consulting have released a new report titled “Navigating Volatility in the U.S. Residential New Construction Sector: Tailwinds to sweep through near-term turbulence.” Despite the housing market’s inability to fully recover from the Great Recession and the likelihood of a slowing economy, the report draws optimistic conclusions for the industry, if not in the very near future, within a relatively short time frame. This is good news for anyone in the home building industry whether your work is on single family or multi-family homes.

The report’s authors took many current factors into consideration when beginning the study including the fact that the current 10-year economic recovery has lasted nearly twice as long as the average economic upswing since the mid-1900, yet the housing market has failed to fully recover. This is one of the key statistics that points to their optimism. According to the report, since the 1970s, housing starts have never turned to negative growth before reaching their long-term average. With starts currently at 1.256 million annually, they are still 13% below the current long-term average. In other words, based on historical data, new home construction has not yet hit a peak for this economic growth cycle and a downturn now is historically unlikely.

While the study points to the labor shortage as one factor holding the industry back from reaching peak growth, a greater obstacle is the late-to-the-game Millennial generation of home buyers. The first Millennials to reach the age of a prospective first-time home buyer were saddled with more student debt than any other generation, a struggling economy, fewer job opportunities, and stagnant wages. They are less likely to be in the workforce, less likely to be married or have children, and more likely to live in urban centers, than previous generations. This data does not portray the average first-time homebuyer. Despite their delay, however, Millennials are fast approaching the critical age of 35 where previous generations have been at their peak in terms of household formation. The report’s authors believe that Millennials, a generation of 70 million, will rush to meet that milestone, which will be a boon for the housing industry.

If a downturn were to occur soon, the authors believe that it would not be significant and that single-family homes would fare better than multi-family dwellings given their even weaker recovery and short supply. But neither would suffer for long. In both cases the slow market recovery means housing has been underproduced in the last decade and there is a heathy demand for homes that should be able to carry the industry through what the authors call a potentially noisy economy in the short term. According to the report, inventory of new and existing homes is at 529,000, which is 21.6% below the long-term average. At this rate, the authors believe that even a turbulent market can sustain moderate growth.

Finally, the authors conclude that this report should do more than make builders feel confident in the next few years of the market, but that it shows an opportunity for investment. The three places that the report says are the best bets for investment are the single-family home market, first-time home buyers, and specifically Millennial home buyers. If that makes sense to you, it’s worth looking into what the Millennial generation is all about. For better or worse, they are said to be very different from previous generations in everything from work ethic to civic duty, open-mindedness to style.

You can read the full report here.