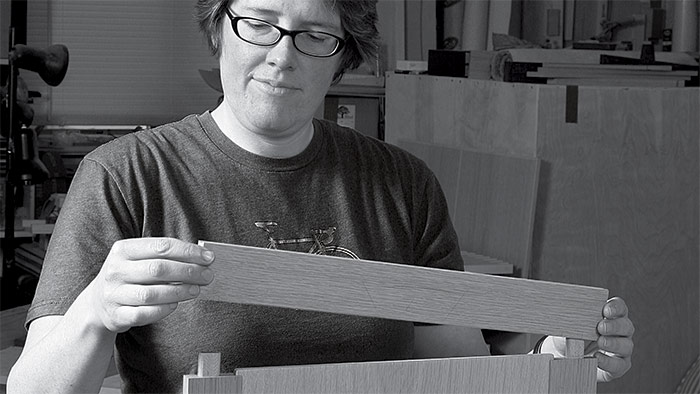 After realizing that the work associated with her college degree left her uninspired, an intensive at the Center for Furniture Craftsmanship and an MFA from the Rhode Island School of Design eventually led Libby to a successful career as a master craftsperson.

Had you known Libby Schrum growing up, you likely would not have envisioned her in a woodshop in Maine carving out a career as a professional furniture maker. An avid athlete, Libby graduated from Southwestern University with a sports-management degree. Not unlike many new graduates, she recognized rather quickly a general frustration and disinterest in her chosen field. “At some point, my mom asked, ‘If you could do anything, what would it be?’” she recalls. The simple question sparked a new course of study and work that would fuel her inner maker.

What followed was an intensive at the Center for Furniture Craftsmanship, an MFA from the Rhode Island School of Design, a fellowship, and a job as a cabinetmaker for a boat company turning out world-class yachts. Each step of the way, Libby honed her design sensibilities and her technical skills.

She eventually struck out on her own and successfully built a studio where her work speaks for itself. “I have not found woodworking to be a lucrative career, but it is extremely fulfilling.” Libby says. “I’m able to step back and realize that with my hands and my ideas, I’ve made something beautiful—objects people can use and interact with, that say as much about me as they do about the world we live in.”

“Choosing to make a living in a creative field takes commitment, both personally and from those who love and believe in you.”

With a busy shop, Libby still finds time to inspire and educate others through her program, STUDIOcation. “I know that there are people who dream in furniture, just like I do. They can see the concept in their head and if they only had the know-how, or machines, or space, they could build it.” STUDIOcation is the place to realize those dreams. It’s her way of sharing her love of woodworking and passing on the joys of craftsmanship. — Rob Yagid, executive director, Keep Craft Alive Keep Craft Alive is our campaign celebrating those who have chosen to passionately pursue a career in design, building, and remodeling. Find out more and show your support by visiting KeepCraftAlive.org, and use #KeepCraftAlive to share your passion for the cause. This post originally appeared on Finehomebuilding.com.