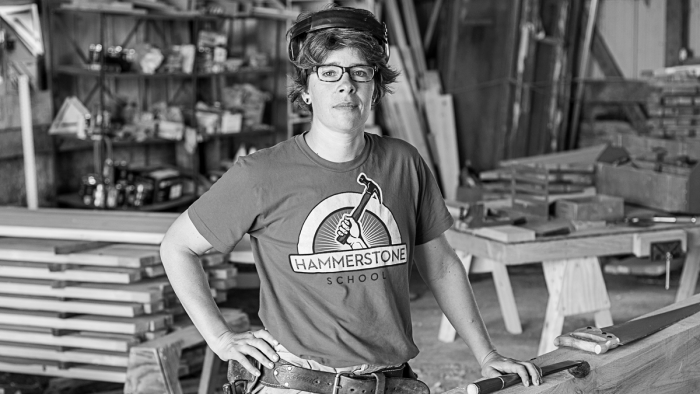 Founder of a school of carpentry for women, this builder and teacher is working to shift the perceptions of a changing industry.

Maria Klemperer-Johnson has always been surrounded by the handmade. Growing up, her mother—a fiber crafter—made her clothes. Her father was a woodworker, building simple furniture that she still uses today. Even some of her lamps were made by her grandfather. “In my family, when we need something, we just build it,” she says.

It’s a pragmatic approach to living that seems to serve as the underpinning of Maria’s personal and professional life. When her home burned down in 2006, she took it as an opportunity to learn timber-framing in order to construct a new one. At the frame-raising, Maria was eight months pregnant and actively working as carpenter.


“I encounter people all the time who, like me, can’t imagine living without making.”

For her, building is more than a means to an end. After all, she didn’t walk away from a future in computer science after earning a degree from Stanford or drop out of grad school at Cornell solely for the sake of self-sufficiency. “I hated sitting at a desk and looking at a screen,” she says. “I wanted to be outside using my body and my mind.”

Maria eventually started her own contracting business, Hammerstone Builders, serving the Finger Lakes region of New York. Being a woman in construction drew attention that was initially a bit thrilling, but after a while grew tiresome. “I started to wonder when people told me I was doing a good job, if they were saying I did a good job, or a good job ‘for a woman.’ And I got tired of being the representative for my entire gender. It occurred to me that the only way this would change was if there were more women represented in the trades.”

So, she created Hammerstone School and began teach- ing carpentry skills to women. Some of her students go on to pursue a profession in the trades. But all leave with new skills, strength, and independence. In 2018, Maria also became an instructor in the Residential Construction associates program at SUNY Delhi, a New York State trade school. There she teaches planning, CAD, timber framing, light framing, and finish carpentry. She also teaches a small-business class for residential construction, and helps create a support network for the few female students there while working to shift the perceptions of male students who may have never worked alongside a woman before—improving an aspect of the industry that is in desperate need of improvement, one student at a time.