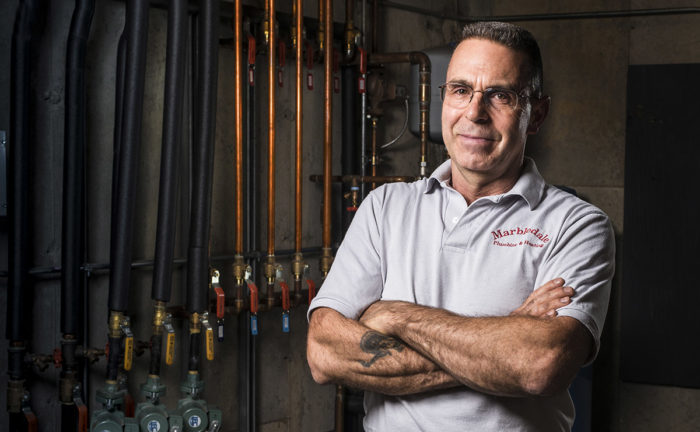 “Too many people see plumbers as overweight, uneducated slobs.”

Jeff Longo started Marbledale Plumbing and Heating in New Milford, Connecticut, over 20 years ago with his partner, Stark Weiner. “Whether it’s a slow drain, a clogged toilet, or a leaky pipe,” he says, “by the time the majority of customers call a plumber, they are very anxious to have the problem resolved.”

His challenge—and a major source of satisfaction—is diagnosing the trouble over the phone so that he’ll arrive with everything he needs. “If I come to your home, and we enter the realm of ‘I’m charging you for my time,’ I don’t want to put a Band-Aid on the problem. I want to be able to fix it correctly the first time and be done.”

When asked what it takes to be a good plumber, Longo says simply, “You have to care,” and isn’t exaggerating when he describes laying out his work to the 16th of an inch “so it lines up with the grout lines.” It’s a measure of his craftsmanship that he’s just as meticulous in places where the plumbing is seldom seen, such as wall cavities, crawlspaces, and basements. Longo admits to being a little OCD, but insists, “There’s a way things ought to be in this world, and crooked pipes isn’t one of them.”