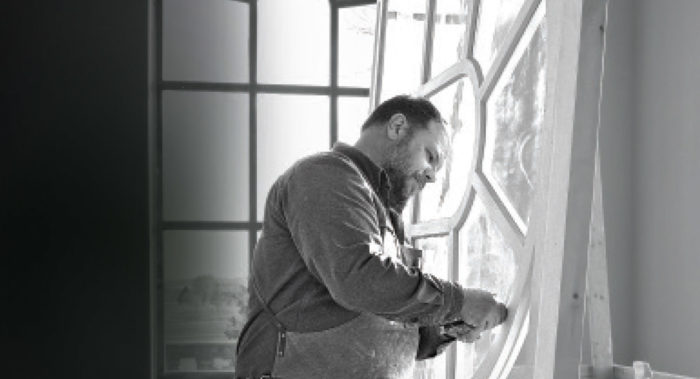 “If you can make a board flat, straight, and square, you can do just about anything.”

Ben Brunick spent the last four years in a state mental hospital—­not as a patient, but as a woodworker, restoring windows. Nearly 200 windows, in fact. Enough to drive anybody a little crazy. Not Brunick, though— he just feels lucky.

“I live in a small town in South Dakota. I’m in flyover country. To land a job like this, in my hometown, that’s interesting, that’s technically challenging­ … it’s a fantastic gig.”

After restoring antique pool tables in Lincoln, Nebraska, for 10 years, Brunick moved his family back to Yankton, South Dakota, and started Chalkstone Woodworking. That’s when the Historical Society approached him for help restoring the Mead Building. Built in 1909 as part of the State Hospital for the Insane, it’s slated to be the new home of the Dakota Territorial Museum.

When Brunick first visited the building,­ all he could see were the huge arched windows out front. “I want to do those,” he said to himself. “I don’t know how I’m going to do it, but I know I can.” And so he has.

Besides fabricating all the sashes, Brunick had to scribe the arched storm windows to fit asymmetrical openings in the brick. On the inside, he then had to fit the double-hung sashes, with matching arches, so that the radiating muntins all line up.

Milling and scribing those arches, he says, was “walking on the edge of catastrophe. I thought, ‘Man, if I cut this wrong, I’m pickled.’” But he’s quick to add, “That’s when it’s t fun. You lose track of time. You lose track of everything. You get lost in it.”