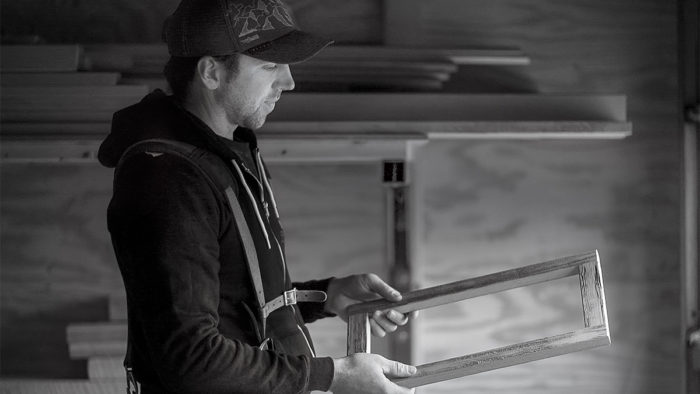 This dedicated craftsperson traced his lineage to and got his inspiration from several generations of Vermont woodworkers and timber framers.

Few professional pursuits forge as strong a generational link as the building trades. You can sense the pride of those fortunate enough to claim themselves a second-, third-, or fourth-generation tradesperson. For those who are carrying on a family legacy, building is bone deep. Alex McKenzie is exemplary in this regard.

While growing up, Alex was drawn to working with his hands and to building things. When he later learned details of his biological family’s history, he discovered where this aptitude may have come from. His great-grandfather was a timber framer who founded the Shelburne Craft School. His grandfather, Lynwood Smith, was a renowned craftsman who taught at the school for most of his life and had work displayed at the Shelburne Museum. Smith eventually met Alex and ended up becoming the biggest infl uence on Alex’s decision to make building and woodworking his career. “It felt almost spiritual knowing that I was going down the same path as he did without ever knowing it,” Alex says, adding, “I would be carrying on a family tradition that would otherwise have been lost.”

Alex has carved out a niche with his company, Cypress Woodworks. He and his crew offer services from framing to fi nish to furniture—with each discipline informing the other when it comes to construction, precision, and quality. Having such a range of skills has helped his company to gain a reputation for excellence.

Alex hopes people see the care that goes into his work and the craftsmanship in its details. It’s all there. What’s less apparent, yet ever present, is a family heritage on full display.