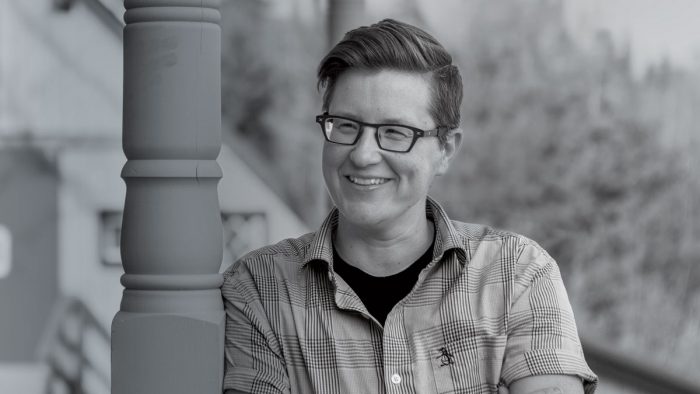 A commitment to inclusion and respect inspired this home builder to create a different kind of construction company.

Ace McArleton is the general manager of New Frameworks, a Vermont-based design-build company he helped found with a commitment to building in a kinder way. The worker-owned cooperative specializes in natural, high-performance building systems and technologies, but its employees are not only building healthier homes—they’re building a healthier company by focusing on the people who are part of their process.

“I’ve become almost as passionate about designing and building our company as I am about building homes,” Ace says. He began his career in the trowel trades of the San Francisco Bay Area, where he gained exposure to some of the inherent benefits of working in construction. But he was also exposed to a toxic side of the industry.


“It’s worth identifying the terrible human behaviors that we’ve inherited as an industry, and then dismantling and systematically undoing them.”

“I saw the people I worked with wanting more. They had skill, drive, and interest. But because there was such a pressure for efficiency, production, and profit, we were all in a race to the bottom. I saw the pain that creates in a person, mentally and physically.” This, compounded by a culture where racism, homophobia, and intolerance is pervasive—often and unfortunately brushed off as just the job-site dynamic—inspired him to nurture a different building environment; one that was inclusive, respectful, and kept its workers experience in mind.

“The materials we’re trying to deemphasize in construction are unhealthy. Once you have a material that’s healthier to produce, it’s also healthier for the craftsperson, healthier for the homeowners, and healthier at the end of its life cycle for the environment. We’re developing social and ecological systems.”

It’s that social component that has driven much of the company’s success. They own their responsibility when it comes to equality, climate impact, and social justice. It should be no surprise that they’ve been overwhelmed with interest from people who want to work with and for them. When you stand for something positive, people want to stand with you.