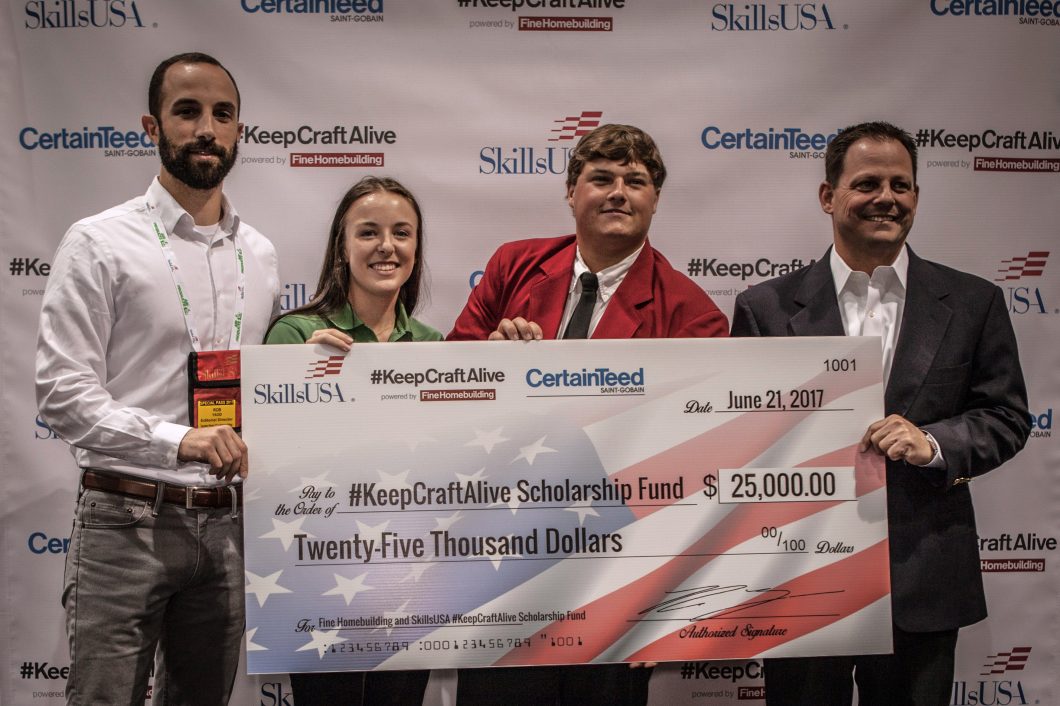 As part of the Keep Craft Alive (#KeepCraftAlive) initiative and via a partnership between SkillsUSA and Fine Homebuilding, five $5,000 scholarships were awarded at SkillsUSA’s Annual National Leadership and Skills Conference held in Louisville, Ky. At a special reception on Wednesday, June 21, 2017, editorial director Rob Yagid recognized the five winners: Harris Lanier, Isaiah Elam, Will Lee, Eddie Escamilla, and Sam Vitez.

Each of these scholarship recipients has demonstrated a passion for their craft and is planning to pursue continued education in the 2017-18 academic year.

Lanier began her freshman year of high school in a Culinary program, which held her interest for little more than a week. When she asked to switch classes, Sustainable Construction was the only program with an opening. Though she was skeptical about her new pursuit, the little bit of hands-on training she received in that first program ignited her passion for this field. Harris has gone on to study everything from carpentry to masonry to metals and manufacturing and construction. When the team at Fine Homebuilding reflected on her application one word came to mind — fierce. In her application essay, Harris wrote, “I’ve grown a lot over the years, as a worker and as a person. I’m a female in a male-dominated field. Most would say I wouldn’t have a chance — that construction is a man’s job and to leave it that way. And you know what my answer is? Let me prove them wrong.”

Isaiah views building as his craft. In doing so, the work becomes an extension of who he is. To him, his work represents the personal knowledge he has acquired over the years, the technical skills he has worked so hard to refine and his deep respect for the workplace. He knows what it’s like to stand back from a project when it’s done, sweating, with the weight of his tool belt pulling at his waist and  feel the unique satisfaction of knowing that he did everything he could to do the best he could.

Lee got his start in the HVAC trade by working with his father when he was around 12 years old. Each summer, he’d spend his days learning from his father. This work fueled his passion for the trade and his interest in all the technical knowledge the job demands. As Will wrote in his application, his passion for HVAC has helped him make many of the major decisions in his life, like enrolling in Mississippi Delta Community College, where he’s currently studying in a two-year HVAC program. Will understands and values the role he plays in making comfortable and safe homes for people, and he’s demonstrated his full commitment to his trade by getting exemplary grades in school. Will is more than a good and passionate student. According to Frankie Chandler, Will’s instructor and advisor, Will is a fast learner, and he is also quick to help other students that may be struggling. It’s these leadership skills, along with what has been described as a fantastic work ethic, that make Fine Homebuilding proud to offer him one of our #KeepCraftAlive scholarships. We need more people like Will entering the trades.

Escamilla also owes his love of the trades to his father, who brought Eddie and his brother onto the job site at an early age.  Like his dad, Eddie has been drawn to the electrical side of construction. He can remember watching his father run cable and setting up electrical panel boxes and thinking that that would be him one day. He’d spend summer days helping to clean up his father’s job sites, or hand his father tools and materials when he needed them. Eddie thought other teenagers might find that to be a waste of time, but he saw it as a way to gain as much knowledge about the trade as he possible could.

Through his father’s guidance, his education and internships and through the experiences of his family Eddie has found his passion — his craft. Demonstrating commitment and passion, in his application he wrote, “Electrical construction wiring challenges me mentally and physically and makes me think in abstract ways. I cannot imagine doing anything else.”

Vitez is continuing a building legacy and is inspired by what he refers to as “the traditions around the American craftsman.” To Vitez, these are the early builders and carpenters who took pride in their work, built things right the first time and who let the quality of their work speak for itself. He recently found that his love of carpentry runs deeply through his family’s roots. His ancestors were ship builders, cabinet makers and house framers. Vitez dreams that one day his name will come to represent years and years of quality carpentry work. This fall, he will be attending the American College of Building Arts in Charleston, South Carolina, where he hopes to study timber framing.

You can learn more about the #KeepCraftAlive scholarship program here.